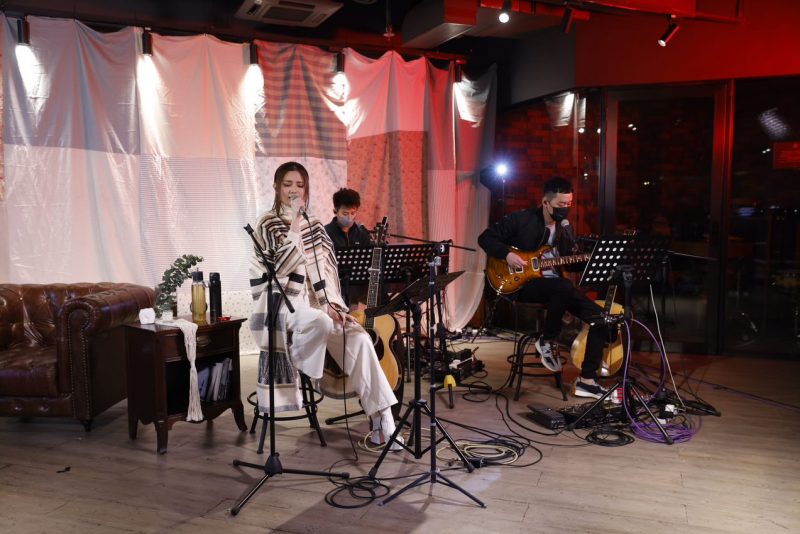 Give full play to gossip and reveal your friends' secrets

OURWorks (Plain Study) singer-songwriter Huang Yan (Cath) recently released the first wave of the title song "Little People" in 2022. The fans are very impressed by her new way of singing love and love. Cath and the team released "Before the Sky" last year. "After holding "Tianguang Live", this time, I have a new meaning, playing late-night online Live, with singing in series with live performances of radio dramas, to accompany fans to spend a different Saturday night.

Cath pointed out that everyone has been busy fighting the epidemic and protecting themselves every day, and they are both physically and mentally tired, so I hope that singing can heal people's hearts. Then Cath first sang "Two Moons" and "The Part of My Heart That Has Not Broken". When fans saw her on the Live, they joined in to support her, and even hit her heart to Like, and the response was enthusiastic. Between Cath's songs, the "Two Persons Limited - Love Radio Theater" voiced by 903 DJ Liang Zi and 881 Aircraft (Jiang Huifeng) was interspersed, bringing double enjoyment to the audience.

In addition to singing, Cath also invited guests to share their views on love. The first one was [email protected] se. Cath and per se have met many times in the workplace. This is the first time to talk to each other. Sandy generously shared her relationship with her boyfriend and partner Stephen. When she heard that they had been filming for 11 years, Cath was envious! Then gossip about each other's big and small love affairs. Sandy also tried his best to solve Cath's "suspect", but he was almost overwhelmed, and the scene was very interesting. Cath also answered questions from netizens on the spot. When asked about her own view of love, Cath pretended to be mysterious and asked netizens to find the answer by themselves.

In addition to singing her own works, Cath also sings idols Jay Chou's "Xing Qing" and Lu Guangzhong's "What's Up With Love" and other favorite works. She even sings and sings by herself. Fans can hear it and keep leaving messages to cheer her up. Then it was the second guest's turn to appear. She was Hilda Zheng Xiaotong, who collaborated with Cath in the stage play "We Can't Grow". When Cath saw Hilda, she hugged first, and then went straight to the other party's private affairs. Fortunately, Hilda talked about everything. When Cath heard that Hilda's love experience was very rich, he opened his eyes and asked everything, as if he was curious about love affairs.

Regarding this performance, Cath admitted that it feels very fresh, because there are very few Lives that last more than 3 hours, and fans who have watched the Live even left a message saying that the song selection is very thoughtful this time, and it is estimated that she will choose it. Sing songs such as "Why He Left You", "Lost in the Sandbar", "I'm Always Practicing Alone", etc., bring surprises. Cath also said with a smile to this performance: "It's like I used to make an appointment with a friend to hang out all night. Originally, the staff sang from 12 o'clock in the middle of the night to 4 o'clock, don't worry, I want to sleep! But that's what The Live was a lot of fun, and finally decided to wait for everyone to finish dinner, have a romantic relationship and sing with everyone before going to bed." However, the fans were not only more than a little bit, but they also enthusiastically offered to Like, which made Cath very moved: "I'm so happy everyone. Hey listening to the song, I hope everyone likes my choice of song! I'm happy to see someone talking like an online concert! Because besides me, there are a few musicians on site, Together with the staff behind the camera, we have achieved something together. I would like to thank all the guests who came to the scene. They are really good. As soon as I asked them, they agreed without asking. Gossip about their love affairs, it's too late to think about shrinking the sand, hahahaha! Just laughing, thank you for your selfless sharing of dating and love, which made me learn more, and I hope it will help in my creation in the future."